Happy New Year! I can't believe its 2018 already...and I have so much writing to do still. Good news, we are definitely going to Scotland in May to study abroad! The course made and I'm so excited. I have a huge book list that I've been working my way through and enjoying every minute of it. I will have more about that later!

Until then, I have some photos from last fall that I've been taking way to long to share. As part of the 2017 Archaeology course at TAMUCT we did a little bit of experimental archaeology with textiles.

So in the archaeology course we spent some time talking about textile analysis and watched a pretty neat film about how natural dyes were used in Oaxaca, including dyes made out of flowers and bugs (more on that in a minute). Many of the traditions used for dyeing with natural dyes today in Oaxaca can be traced back to the same methods used in ancient Mesoamerica. There is also a robust tradition of dyeing and weaving textiles in the American Southwest that is extremely fascinating. I'm by no means a textile expert, but I have always been fascinated by fiber arts and the process involved in taking a fiber from it's natural state (including dyeing) to a finished textile.

One of the other interesting things about textiles in archaeology is their rarity, as they are made of organic materials they are rarely preserved unless they are recovered from special environments such as bogs or extremely cold and/or dry environments.  Experimental archaeology is one way to try to understand and reconstruct how things were done in the past, and due to time, material (and expertise!) restraints I opted for dyeing rather than weaving, spinning, or any of the other myriad options available. It was actually at the last archaeology fair that dyeing was suggested by students (thanks Pam and Sierra!) and I just loved the idea. Thanks to the students from the 2017 Archaeology course for helping make this project happen!

So, first we wanted to try out a few different natural dyes on yarn samples to see the result of the color that could be produced before committing to dyeing entire skeins. These are samples from an undyed bare wool skein, 100g, worsted weight. We used Knit Picks brand "bare wool" if you're thinking of reproducing this project.


We ended up dyeing in two batches, or trials. The first time around we wanted to test four natural dyes and selected the following: onion skins, black beans, avocado pits/skins and cochineal. All but the cochineal dye came from the grocery store. Cochineal is a small bug that lives on prickly pear cactus, and was used as dye to produce the color red (carmine, from carminic acid) by the Maya and Aztecs and was popular through colonial times in Mesoamerica. It's still farmed today as a natural red food dye and for handmade textiles (my source came from Peru and was about $10 bucks on Amazon). You can spend a ton of time researching cochineal on your own so I won't go further here! I did find out the color fixes better on wool than on cotton, which would have been used in ancient times before sheep and their wool made it to Mesoamerica.

After seeing the results of our initial test we chose to dye all of our yarn (about 17 skeins of 100 g each!) using two dye baths: onion skins and cochineal. One process that is not pictured here is the  mordanting process. In order to "fix" the dyes to the wool you need to add a mordant (although some dyes are self-mordanting). In both cases we used alum, which is sold online inexpensively and is a powder that is added to water to create a mordant bath. In the first trial I don't think we left the wool in the mordant long enough before setting the samples into the dye baths, which explains why the cochineal dyed wool did not attain the depth of color that it did in the second trial. In the second trial I mordanted all the skeins at home for the full time required prior to the bringing them in for the class to process them in dye baths the following day.  This resulted in a much deeper color for the cochineal dyed yarn.


Other notes on our first trial: we were fairly sure the onion skins would produce something close to yellow and the cochineal would produce something close to crimson because of the color of the dye baths during processing and so we were pleased with the results. We were less sure about the black beans and the avocados. Internet sources suggested the beans would make a corn flower blue/grey dye. We ended up with more of a greenish grey. Avocados were meant to produce a pink dye but we could only manage a brownish peach color. The students were quick to tell me that I shouldn't have suggested putting the avocado skins in with the pits to make our dye bath. They were totally right and I don't know why I insisted on believing my internet source! The skins muddied the dye bath a little too much and probably affected the color produced.


Another contributing factor to our results with the avocado and black bean dyes likely had to do with the fact that we used wool and not cotton. I was surprised when one student brought in the results of  his own experiment at home using just avocado pits on a cotton tee that did indeed produce a beautiful pink color! He (thanks Will!) reported that he learned avocado pits only were required and that they produced a self mordanting dye. After seeing the results of our first trial and the student's experiment, I wouldn't be surprised if cotton just takes up this dye better than wool! The black bean dye may also show color differences based on the fiber type, as we noticed the piece of cotton cheese cloth we used to hold the wool together for the black bean sample was the expected blue-grey color and not the greenish version we ended up with.


If you're wondering why the onion skin dyed yarn looks pumpkin orange in the first trial and more yellow in the second trial...it's because the dye is soaked up by the amount of wool that is present. In our first trial, we had a very small sample of wool and a very large amount of onion skins that I let sit in the dye bath overnight after our trial. The small amount of wool was able to take in a much larger amount of dye. In the second trial, we used a lot of wool (7 or so 100g skeins in one dye bath) and it was not left overnight, so there was less dye to go around, resulting in a lighter color. Also, we added a few batches of wool to the bath a little later than the others, resulting in a few different shades of yellow.

After the dyeing process I took the yarn home, rinsed it and left it to dry before bringing it back to the classroom. The yellow dye produced by the onions stuck really well and there was not much dye left to rinse out. The cochineal however seemed to have a lot of purple dye dripping out of the yarn no matter how much I rinsed it. I learned bleach does remove cochineal dye from a bath tub...

I really enjoyed this project and hope to do some more textile-based experiments soon, if not in the classroom then on my own. Thanks for visiting! 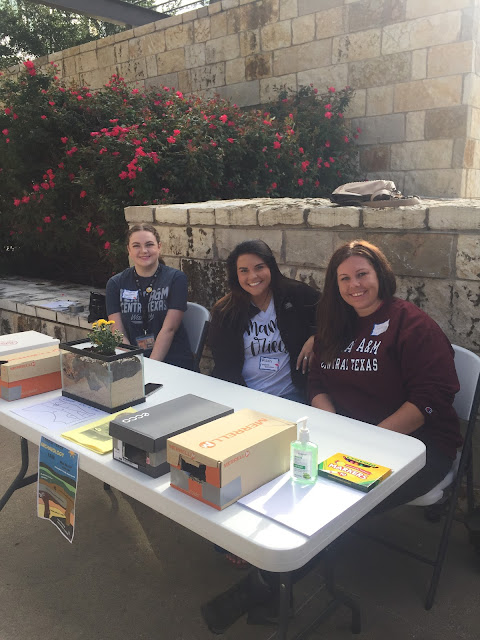